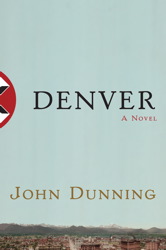 Bookscout, a short story, was published as a chapbook of 50 copies for each of five regional book fairs in 1998.

Tune In Yesterday, published in 1976, subtitled by the publisher as The Ultimate Encyclopedia of Old Time Radio, but  John’s later book “On the Air”  published by Oxford in 1998 contained at least three times as much data.

Booked Twice is an omnibus edition containing the first two Janeway books Booked to Die and The Bookman’s Wake.

Deadline, first hardback edition, published in England in 1982. The most interesting thing about the jacket is the use of the word “unputdownable.” That’s England for you.

Deadline, American hardcover edition. The book is almost sedate compared with its illustration. Some people refuse to read it because of the jacket, but this was a talented young artist’s vision of the novel.

On the Air: The Encyclopedia of Old Time Radio, 822 pages, contains a 63-page index and a ten-page bibliography.

A Two O’Clock, Eastern Wartime 2001.  This picture shows the fingerprint edition. The index finger is fairly common; the scarcest is the “fickle finger of fate.”

Some books John recommends for writers.

A Writer’s Journey: Mythic Structure for Storytellers and Screenwriters by Christopher Vogler

Writer’s Block and How to Use It by Victoria Nelson

Writers Time: Making the time to write, by Kenneth Atchity

Structuring Your Novel by Robert Meredith and John Fitzgerald